The CIHD funds two separate types of pilot grant proposals each year. One funding opportunity is for CIDH members seeking to use our CIDH core facilities. The second is a broader funding opportunity that requires a collaboration with a second NIDDK-funded hematology center. For more information, click on the two links below:

Cooperative Centers of Excellence in Hematology

Applicants must be members of the CIHD (information on application can be found on our website; cihd.cores.utah.edu).  One proposal per applicant will be accepted in each year. A Principal Investigator (PI) must be a tenure track or research track faculty with an appointment of at least 0.75 FTE. Research faculty must have had a two-year residency at their institution prior to funding applications. Proposals that have previously been submitted to an extramural agency and found to be non-competitive will not be reviewed. One exception to this restriction is proposals previously submitted to an extramural agency that were declined on the basis of insufficient preliminary data. In that case, an executive summary statement specifically stating this deficiency should be submitted along with the application. If the CIHD review panel has turned down an application, the PI is allowed only one re-submission of a revised proposal on the same subject. Revised proposals must indicate changes from the previously reviewed proposal and responses to reviewers. All successful applicants for funding will be asked to present an update of their research at the next annual CIHD fall symposium.

Recipients of a CIHD Pilot award in 2017 are eligible for apply for a second and final year of support. In this case, your progress report is due by September 1, along with your resubmission. Such proposals will be reviewed together with new submissions and we will fund 4 total proposals from the submissions. CIHD Pilot recipients can request a carryover of funds to a second year, but the funds must be expended by the end of the second fiscal year (June 30 of the extension year).

Proposals will be limited to three pages of narrative on significance, background and proposed studies. All proposals will require in addition a statement of relevance of the proposed project to our CIHD mission objectives, a description of the CIHD cores to be utilized, NIH-style biosketches including current and pending support, a proposed budget and justification page and a page describing plans to submit proposals to NIDDK for extramural support. If the proposal is a re-submission, one additional page is allowed to address reviewers’ concerns.

Applications should be submitted as pdf files to dennis.winge@hsc.utah.edu and john.phillips@hsc.utah.edu

Proposals will be reviewed by an external email review committee consisting of three senior scientists in the field. The group will each address the strengths and weaknesses of each proposal and rank the merits of the various proposals. Confidentiality of this process will be stressed to all reviewers. This group will rank the submitted proposals and make a recommendation for funding to the CIHD Internal Advisory Committee. The selected proposals will be submitted to the NIDDK CIHD Steering Committee for approval.

The review criteria used to evaluate submitted proposals will include:

e) Is the applicant an early-stage investigator or a senior investigator with a major new research direction?

Synergy at The University of Utah

Synergy with Existing Seed Grant Programs at the University of Utah

There are two relevant Seed Grant programs that may synergize with this CIHD Pilot and Feasibility Program for faculty members at the University of Utah. The Vice President for Research Seed Grant Program offers awards up to $35,000 per proposal for new initiatives. Likewise, the Center for Clinical and Translational Science provides funds for pilot initiatives. Our CIHD Pilot and Feasibility Program will consider proposals seeking support from these programs if the requests to each funding group cover non-overlapping project goals. The applicant would need to submit each sub-project separately to each funding program.

Adam Hughes: Elucidating the role of the LON protease in the regulation of cellular iron metabolism

Congratulations to the the following five investigators whose proposals were funded in the CIHD 2017 Pilot and Feasibility Grants Program:

Adam Hughes: The role of lysosomes in maintenance of cellular iron metabolism

Diane Ward: The role of Abcb10 in red cell hemoglobinization

Our NIDDK-funded Center for Iron and Hematology Disorders has awarded three pilot research grants for the 2016/2017 fiscal year. Six proposals were considered for funding and the three successful applicants include the following:

Dr. Sigala will focus on the role of the acyl-carrier proteins present in the mitochondria and apicoplast of Plasmodium in iron-sulfur cluster biogenesis in the two organelles and the role of each pathway in the physiology of Plasmodium parasites. A long-term goal of his research is developing new therapeutic targets in treating malaria.

Dr. Medlock is addressing the role of two novel proteins PGRMC1 and PGRMC2 in modulating heme synthesis in mammalian cells. She demonstrated that these proteins interact with ferrochelatase and regulate its activity. She proposes to generate knockout cell lines in culture and zebrafish to investigate the physiological consequences of loss of these proteins on heme production.

Dr. Barber is focused on the evolutionary battle between pathogens and primate hosts for access to iron and heme. He will address how primates evolved in response to iron and heme piracy by pathogenic bacteria. In his proposed studies, Dr. Barber will focus on phylogenetic analyses of hemoglobin and hemeopexin. 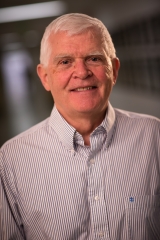